I’ve been doing a lot of front country cross country skiing this year which has been a lot of fun!  Exploring both Jackson Ski Touring and Great Glen Trails is something I highly recommend, both for the challenges and the scenery!  However this past weekend I got into the backcountry again, possibly for my last time this season at least on skis! 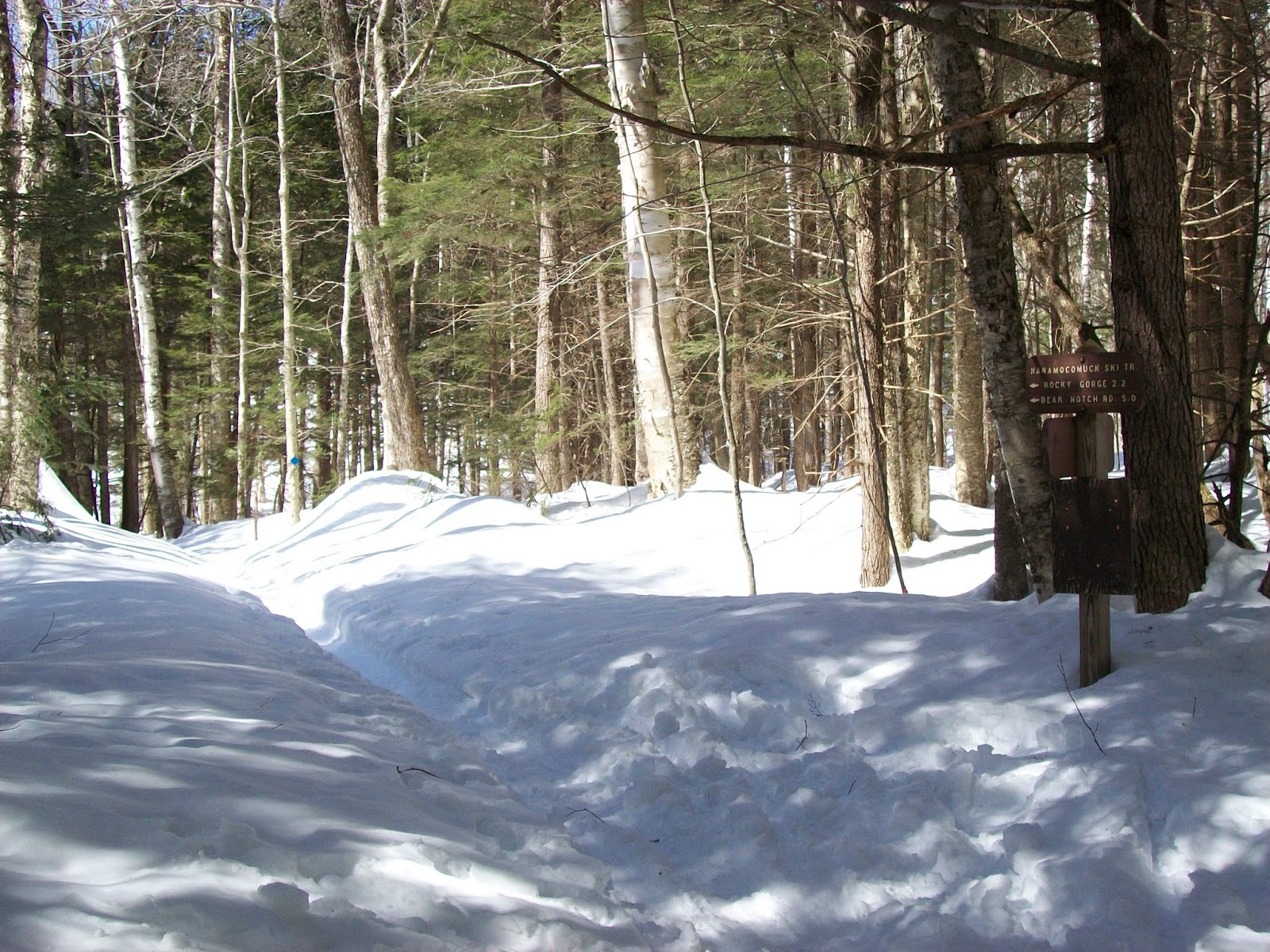 My husband and I went down to the Kancamagus and skied the lower part of the Nanamocomuck Trail! Have fun pronouncing that name!  Nanamocomuck was the son of Passaconaway, the brother of Wonalancet and the father of Kancamagus…thus he deserves commemoration if not pronunciation!  If someone out there has more than a guess on how to pronounce Nanamocomuck’s name, filling us all in would be just wonderful!!!

So the Nanamocomuck Trail stretches from Albany Bridge at the end of Dugway Road up to Lily Pond across from the Livermore Trail.  The full length is about 16 miles.  Parts are rated easy and intermediate.  We skied the lowest section in combination with two side loops, the Wenunchus and the Wenonah, over two days. 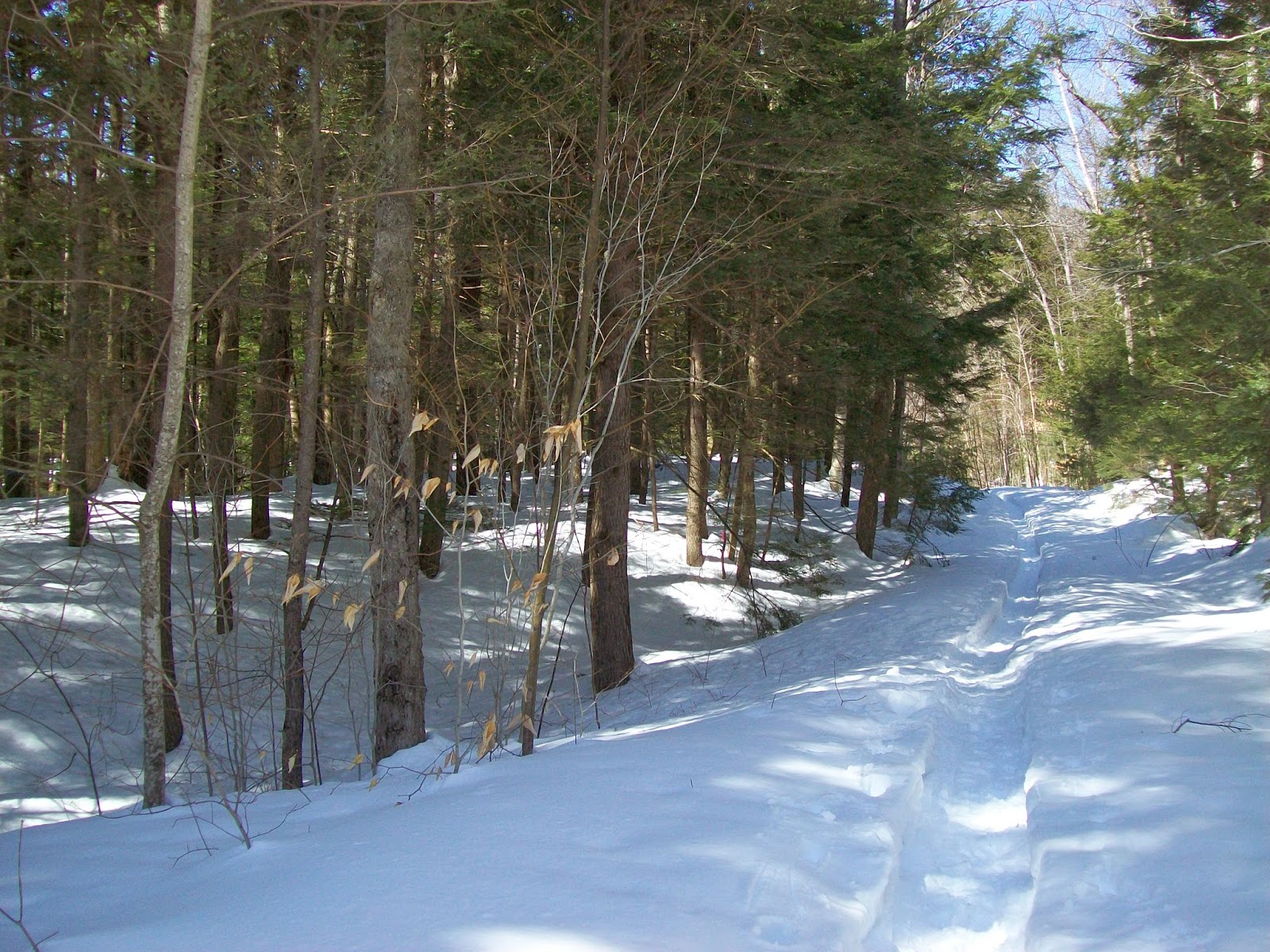 Day #1 we skied from the Albany Bridge 1.9 miles along the river and then proceeded clockwise around the Wenunchus Loop.  Parking at Albany Bridge requires a WhiteMountains Parking Pass.  If you don’t have an annual one, you can self pay for one at the trailhead.
The first mile of the trail was pretty broken out and the trail was a very slight uphill.  We had gorgeous views of the river off and on along the whole length.  After that mile, the majority of trampers turned back and we followed a single track of skis to the far end of the Wenunchus Loop.  Conditions quickly became much more difficult.  There were 4 feet of soft snow with a crust on the surface.  The relentless melt and freeze cycle we’ve been experiencing was making the tracks exceptionally slick and skiing beside the tracks laborious.  The occasional fall was quite the challenge as there was no solid snow to push up from.  If planning on backcountry skiing before our next snow or rain, I would plan for conditions such as this especially in the lower elevations.  (Up here in Pinkham the snow is softer powder and the crust thinner.)  Go slow, keep your overall mileage down and get yourself primed for the challenge!
All in all folks, the trip took us much longer than expected and we were pretty wiped out by the end of it BUT…the terrain was beautiful both along the river and over the ridge line which the Wenunchas followed!  We even had a blue sky day and we were outside and together so happy were we! 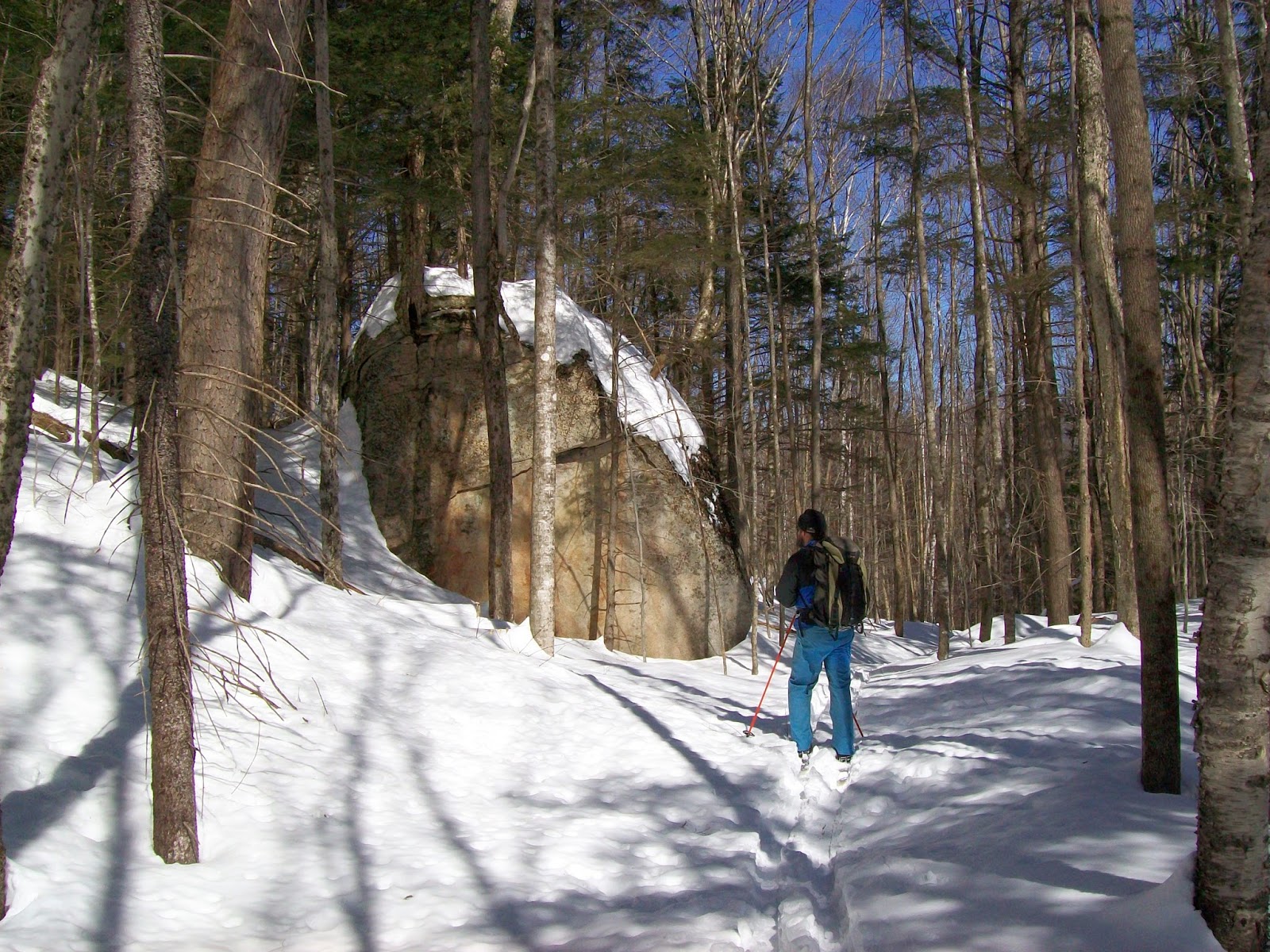 Day #2 we shortened the plan based on Day #1’s experience and thank goodness we did because it was even MORE challenging!!!  The Wenonah Loop is accessed from Rocky Gorge Picnic Area, a parking area which also requires the White Mountains Parking Pass.  You ski directly across Rocky Gorge and we went to the left on the Nanamocomuck and proceeded clockwise around the loop.  Wow!!!  Right off the bat we went up a hill which was steep and narrow enough (and actually packed out enough) that we took our skis off to both climb and descend the other side!  This whole section of the trail was rated Intermediate but it must be at a high intermediate.  It truly was a bit over my skill level on skis.  On the Wenonah Loop we began with a phenomenal uphill which became steep in locations.  Eventually we topped out on the ridge and the downhill on the other side was nice and mellow however with the snow conditions, the whole loop remained challenging!  The tracks were extremely slick.  Off the tracks was still breaking through a crust.  We could either go very very fast locked into the tracks or basically walk down the trail to the side of the tracks.  Sigh!!!  Still was beautiful!  Still enjoyed ourselves but for myself, if I return to the Nanomocomuck on another year I will plan on low mileage and an expectant attitude!!!
If you are comfortable with your backcountry skiing skills and equipment however, I would highly recommend going down and exploring this location, if not this year… next!!!
Tuckerman’s Ski season is under way although the avalanche conditions are still not low.  Being able to assess AvalancheConditions is still recommended to ski the Bowl, however many are rampantly enjoying the ski down the John Sherburne and we have 58 inches of snow here in Pinkham Notch!!!  Harvard Cabin closes March 31 this year but we understand there is still some nice ice climbing up there for day users!  Being able to assess avalanche conditions is recommended in Huntington Ravine as well.  Despite some crazy conditions above tree line, a number of folks have summited Mount Washington.  Currently there are 29 inches of wind-blown snow on the summit of the mountain.   After the last snow, we had folks slogging up the Lion’s Head winter route with snow up to their armpits!!!  It is definitely more packed down since then but we would still recommend snowshoes, crampons and ice ax and the ability to know how to use them for a summit bid!  Lower trails are all snow shoe worthy so for you folks who really really enjoy HAVING to use snowshoes, NOW is the time to come get into the woods!!! Front country ski systems are beginning to close down due to lack of public demand so be sure to check their websites before you come!  Great Glen Trails is closing this Sunday and Attitash is going to part time hours but Wildcat will be open until April 14 and is skiing great!!!  Despite what you think, it is still well winter up here and if you want a bit more fun before spring, be sure to come up!!!


For any general questions, conditions information, or trail advice, please feel free to contact us here at the Pinkham Notch Visitor Center front desk. We are available by phone at (603) 466-2721 every day from 6:30 AM to 9:00 PM or by email at amcpinkhaminfo@outdoors.org. To make reservations at AMC Lodges and Huts, please call (603)466-2727 available Monday through Saturday 9am-5pm. We also offer ski and stay packages at our Joe Dodge Lodge and the Highland Center.
Be sure to check weather conditions and avalanche reports before you come and call us here with any questions! We'll see you up here!