What's All the Hoopla about Lion's Head?

There are a handful of methods to get to the summit of Mount Washington from the east side in the winter, but none of them are easy.  There are technical climbing routes in Huntington Ravine, but these shouldn’t be attempted without proper training and experience with ice and steep snow.  There are also inherent dangers such as falling ice and pressurized ice dams.  One could boot up a ski route in Tuckerman Ravine, but these tend to be very steep, and avalanche dangers can be substantial.  The Nelson Crag, Boott Spur, or Glen Boulder Trails could be taken to the summit, but these routes are long and indirect, have extensive stretches above treeline, and are not regularly traveled in their entirety. 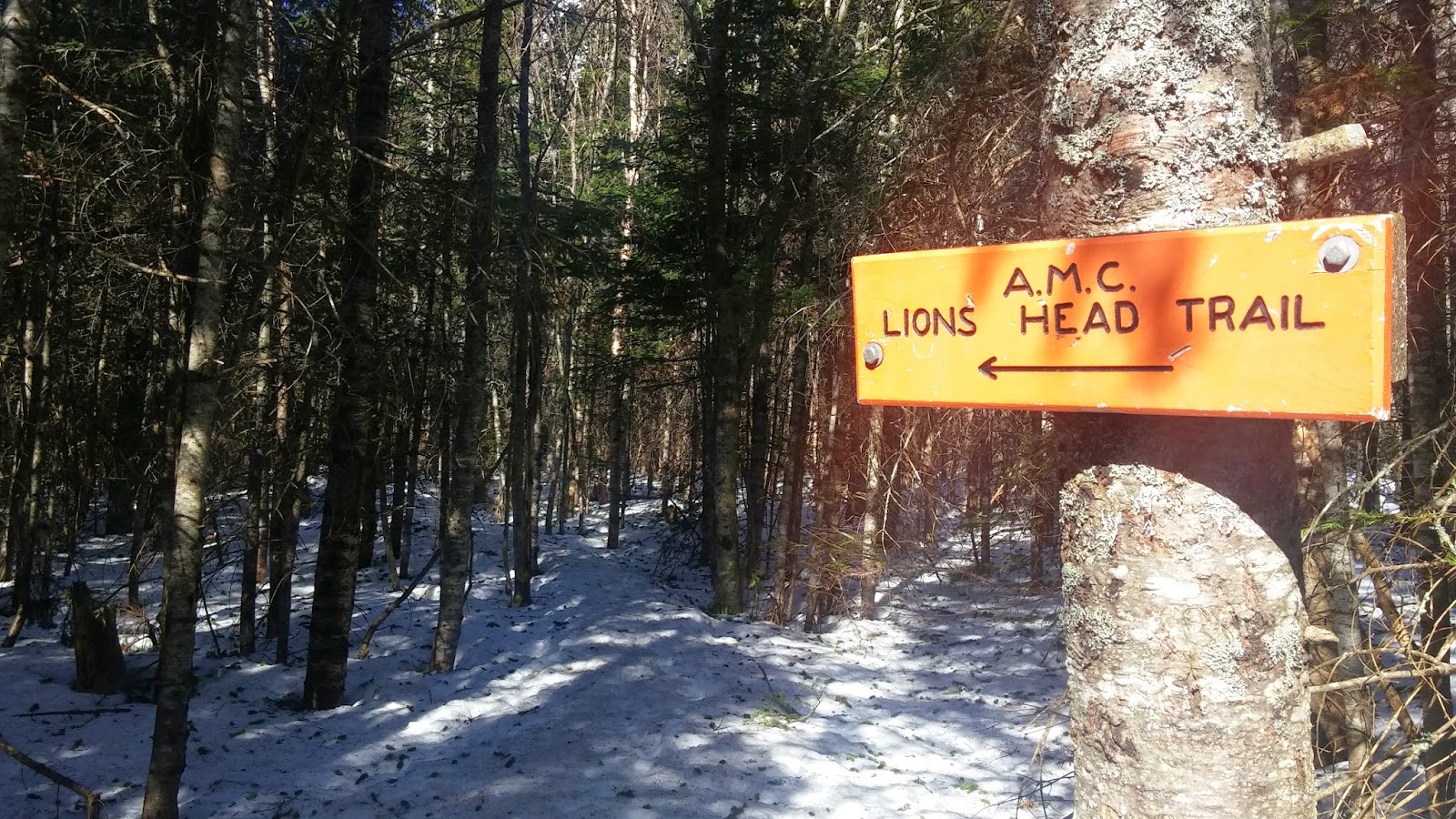 There are orange signs indicating the way to the Lion’s Head Winter Route.

This leaves the Lion’s Head Trail, which is the most popular way to the top in the winter.  I’ve mentioned this route previously, but it really deserves its own post.  Despite the popularity, this route has sections that are extremely steep and difficult.  Even the steep parts of this trail are typically covered with snow and ice.  In some weather conditions, the underlying rock is exposed.  In others, the rock is exposed but coated in a thin layer of verglas – a thin layer of transparent, smooth, and slick ice that conforms to the corners and curvature of the rock.  Crampons, a mountaineering axe, and the knowledge to use both appropriately are a must when taking the winter route.  This sounds daunting, and for good reason.  The Lion’s Head Trail is a commitment – not only because it is a difficult climb, but also because it is a treacherous descent.  The steep part of this trail is one of the most common locations of winter injuries on the mountain.  So, with that grim warning out of the way, let’s go on an adventure!

Thursday was a spectacular day.  The Mount Washington Observatory called for plenty of sun, summit temperatures reaching 40 degrees, and winds in the 25-40 MPH range.  I was scheduled for the Pinkham Notch Visitor Center Information Desk in the afternoon, but I figured I had enough time to hit Mount Washington before work.  I started my morning with a hearty breakfast: French toast, home fries, bacon, sausage, orange juice, and half a grapefruit.  The kitchen cooks a mean breakfast here.

After breakfast, I hopped on the Tuckerman Ravine Trail.  It feels like half the phone calls we’ve gotten lately are inquiries about how that trail looks.  (The other half are about the Sherburne ski trail conditions, more on that later.)  On Thursday, and for now, there is snow all the way down to the visitor’s center.  However, there are a few rocks starting to peek through at the lower end, and all three bridges are completely clear of snow.  With the temperature and morning sun, the snow was already softening. 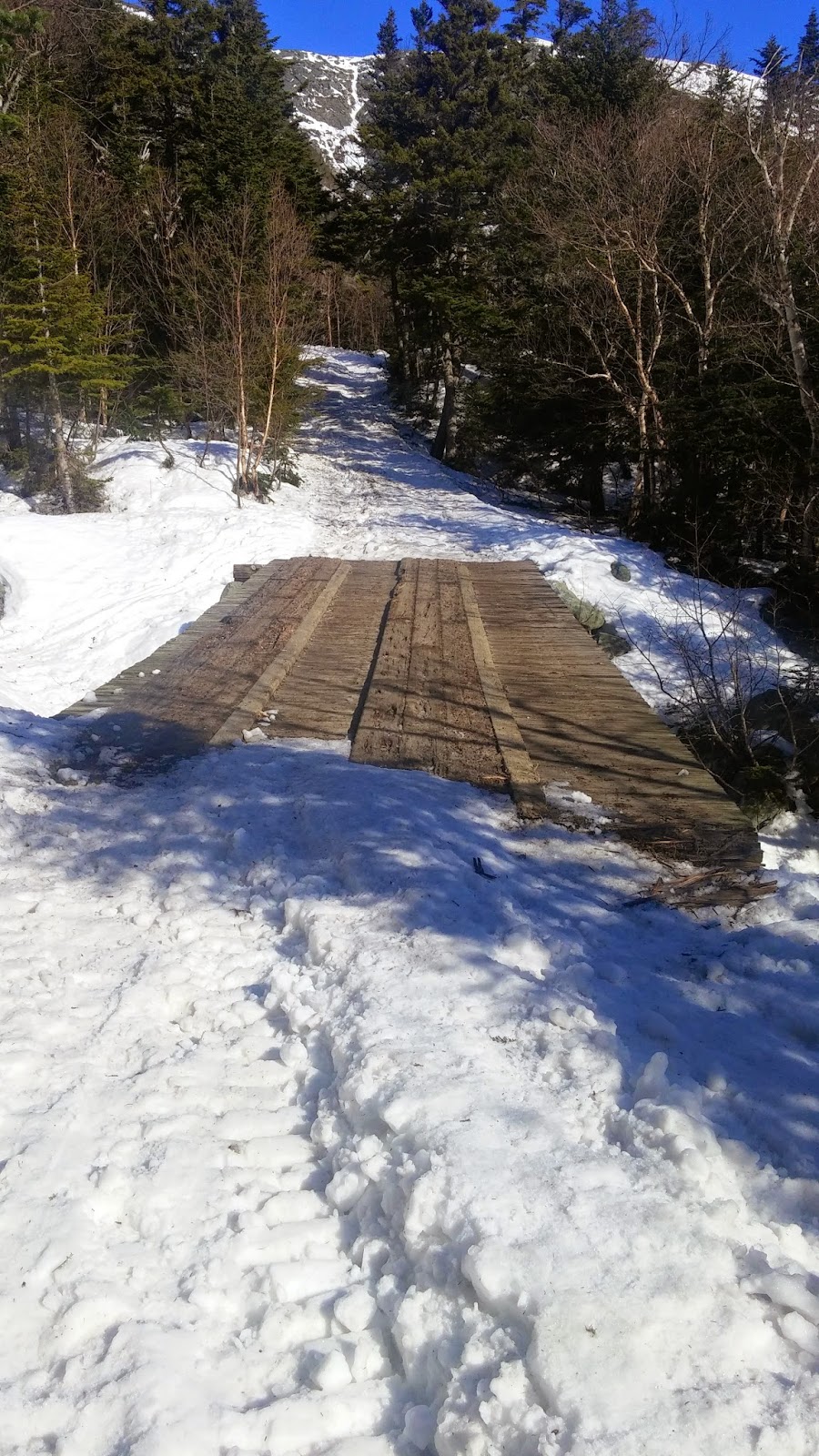 The third bridge on the Tuckerman Ravine Trail.  I think that’s Yale Gully dead ahead of the trail.

I passed about 15 people skinning up and then turned right onto the Fire Road, briefly, before hitting the Lion’s Head Trail.  I had a drink of water and continued.  Before long, the trail started to get steep.  I put on my gaiters and crampons and pulled out my mountaineering axe.  Time to have some fun.


I got to the first of a few extremely steep parts and worked my axe and crampons up the little gully.  It would be fair to say that I exhaled heavily when I got to the top.  Nothing like climbing with sharp pointy things everywhere to get your heart going.  The other steep bits were snow covered, so I planted the pick for every few steps up – although someone had chopped steps at one point.  Eventually, I made it past the steeps and got above treeline. 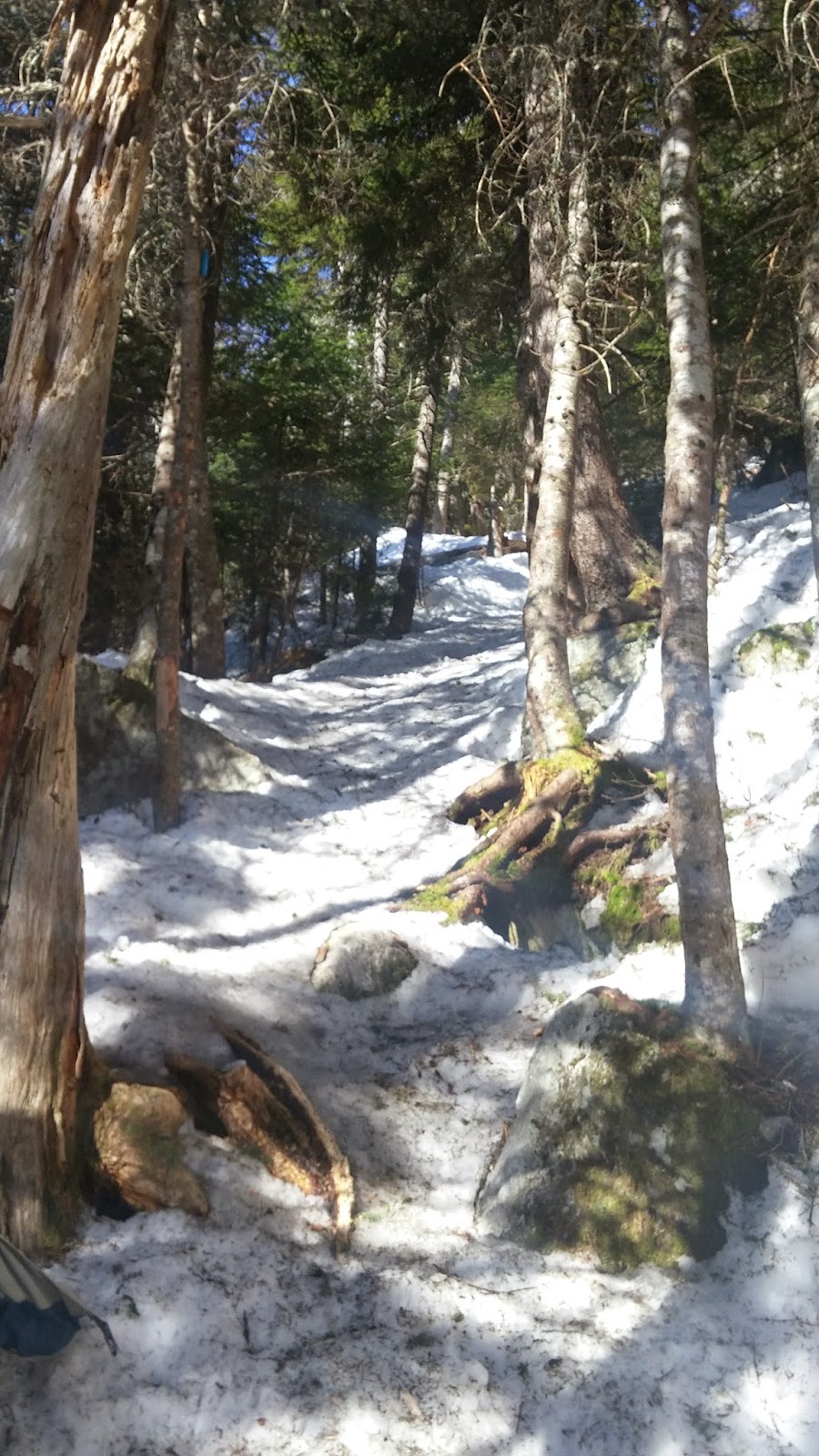 There was much less snow above treeline than I expected.  It seems the wind, sun, and warmer weather as of late have combined to clear some areas of snow entirely.  Before long, I took off my crampons and was rockhopping my way up the trail.  I stopped a couple times along the way to watch skiers and snowboarders climbing up and plunging down Tuckerman Ravine.  Near the junction with the Alpine Garden Trail, the trail disappeared under the snow again.  I put my crampons back on and made the final push up the summit cone.  The summit was also largely clear of snow, especially compared to the other times I visited the summit this winter.

Some areas above treeline are back to bare rock, owing to the wind, sun, and (relative) warmth.

I opted not to put my crampons on for the descent.  Crampons for me have a surprisingly large impact on my balance and increase my potential for tripping whereas bare boots allow me to glissade, that is to say, descend in a method somewhat like skiing…except without skis!  I ended up glissading the bottom half of the summit cone, rockhopping down Lion’s Head, and glissading again to treeline.  Glissading can be unnerving, but it’s efficient and exhilarating.  Please however in your choosing to use crampons or to glissade, use common sense and make decisions based on YOUR safety!

Being back in the trees also meant being back at the steep part of the Lion’s Head Trail.  I faced the slope and down climbed most of the way – planted the axe, kicked a few steps down, and repeated.  Without too much trouble, I got back to the exposed rock section.  Three people were at the bottom end looking slightly apprehensive and they waved me down.  I took a deep breath and slowly lowered myself through the gully.  A minute or two later, I was back on solid snow.  Safe.  I wished the group well and flew the rest of the way down to the visitor’s center to start my shift.

But “wait,” everyone’s saying, “what about the ski conditions?”  The skiing this week has been great.  The majority of Tuckerman Ravine was forecasted at low avalanche danger all week.  The sunshine has been abundant, making for soft and stable snow conditions.  Winds were a bit high at times, but temperatures have been well above freezing during the day.  The parking lot filled up even on weekdays, and thousands of people passed through the visitor’s center both days this weekend.  Cars lined both sides of Route 16 for at least a quarter mile in both directions.

The Bowl still has plenty of snow.  People have been raving about Hillman’s Highway, Left and Right Gullies, Lobster Claw, the Snowfields, and pretty much every other route up there.  Gulf of Slides has had great reviews as well.  The John Sherburne ski trail has been skiable all the way to the parking lot this week, but it isn’t looking particularly pretty.  There are a lot of moguls, and the bottom end is getting patchy.  No one expects the bottom parts and waterbars to last too much longer, so come and ski it while you can… condition are changing daily!!!
As always you can check AMC conditions for the latest report from the snow stakes and/or call us here at Pinkham to see what we’re seeing out our windows and for the best trail advice we can give you!

From skiing safety to lodging, check out our comprehensive resource for properly preparing for your trip to Tuckerman Ravine>>

For any general questions, conditions information, or trail advice, please feel free to contact us here at the Pinkham Notch Visitor Center front desk.  We are available by phone at (603)466-2721 every day from 6:30 AM to 10:00 PM or by email at amcpinkhaminfo@outdoors.org.  To make reservations at AMC Lodges and Huts, please call (603)466-2727 available Monday through Saturday 9am-5pm.