I made sure I got a nice early start from the Greeley Ponds trail head just off of the Kancamagus Highway. For a midweek hike with a 7 am start, I was not anticipating already seeing two cars in the parking lot, but it is always nice to see people out on the trail. The first 1.3 miles of Greeley Pond trail is relatively flat with a few bog bridges helping the average hiker from getting their boots wet before the trail begins to elevate. The trail crosses a small stream, which requires some rock hoping, but nothing too challenging. I decided to hike both peaks because there was only a mile between them. I also thought it would be a good idea to take the .3 mile detour to see the Greeley ponds at the end of my trip up the Osceola’s. The trail was very well marked and could easily be distinguished even though it was the heart of fall and most of the leaves have fallen.

Once you pass the junction between the pond and the mountain trail you begin working your way towards the top. The first half mile is relatively tame, but then you run into what seems like a never ending uphill battle. The trail does even off in some places to allow for a quick rest. There were also a couple of sections of ice on the trail where the sun was unable to hit because of the tree coverage. This also caused faint remnants of snow along the side of the trail, which added the winter feel. 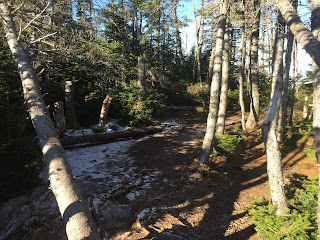 "Some patches of snow still lingering from the day prior"

As I continued up towards the east peak there was a break in the trees which I assumed was potentially a scenic overlook towards the top; I was only half correct. This was an exposed slide which, if you were not already tired of the uphill definitely made you think on your feet. The rest of the hike up to the East Osceola was fairly gradual with one more scenic overlook of the surrounding peaks. The top of east peak could easily be walked past as it is only a pile of stacked rocks along the trail in a decent amount of tree coverage.

As I took a quick break at the east peak, I kept thinking about how challenging “The Chimney” was going to be. As I descended down the east peak towards the main attraction of Osceola it was more of the same up and down rocky terrain I was faced with in the past. As I reached the “The Chimney” I quickly gauged how I was going to scale this twenty five foot rock wall. There was a bypass right next to it, but what fun would that be? And there I was scaling up the side of the ledge. After this rock scramble, the trail flattens right out which provides spectacular scenic views down into WatervilleValley and the ranges that surround the town. A few more people joined me up at the top. Two of them I passed from the Greeley Pond trail and two more from Tripoli Road. 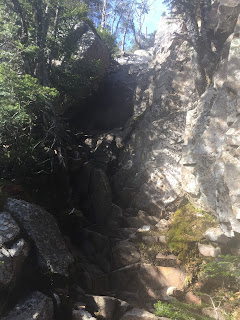 Going down a steep section is always the worst. Going down “The Chimney” would have been a challenge on its own, but I decided to take the bypass, which made the going a little easier. I would strongly recommend taking hiking poles which greatly reduce the amount of stress on your knees because this is all downhill from the east peak. The only highlight from the decent would be seeing a pileated woodpecker and some low flying fighter jets from the Air National Guard.

The relatively quick walk over to Greeley Ponds takes no time at all. It is flat the entire way and offers excellent views of a back country pond. On my way to the pond a ruffed grouse decided I was a potential threat and flew away which gave me a good scare.

You can find the Osceola hike on AMC Map #3 Crawford Notch/Sandwich Range and it is listed in the AMC White Mountain Guide under the Mt. Osceola Trail. Overall, I can say the Osceola’s were a fantastic and challenging hike. I could not have had a better day in November to hike these peaks!

"The view from Osceola"
As always you can check AMC conditions for the latest report and/or call us here at Pinkham to see what we’re seeing out our windows and for the best trail advice we can give you!